When I wrote this blog two years ago, I said there would be a happy ending to this part of my story. Today, I get to write about that ending.

September 9, 2018. I awoke at 3:52 am after a restless night. My alarm was set for 4:00. I washed my face, braided my hair, ate my breakfast, and donned my Zoom Performance tri kit. By 4:45 am I was on the way to the start of my redemption race, along with my family. I don’t know if I was nervous. I don’t know what I was. Floating outside my body, I think.

With some encouraging words from my Coach and hugs from my family, I made my way to the swim start. A rolling start this time, I lined up according to my expected swim finish time (ok, a little faster than my expected time). Due to recent flooding in Madison, the swim start was moved, and frankly was a little sketchy. Entering the water was a muddy slide into a drop-off. Surprisingly, I found the spread-out approach to the swim to be rougher overall than the mass start I experienced in 2016. With a sharp elbow-bang to the top of my head in the first 400 yards, I was beginning the day I had trained for.

There was a bit of wind that morning, and a good amount of current in the wrong direction on the longest stretch of the swim. Luckily, it was not even close to the chop we swam in at Ironman Wisconsin 70.3 in June, so I was more than ready for this. Even though I know it slowed my time by a few minutes, I was able to finish 6 minutes faster than in 2016. It was the fastest race swim of my life, and I was thrilled as I climbed back out of the water, up the muddy wall.

Running past my crew with the first of many hilarious signs on the way to transition, I found myself more out of breath than I expected going up the helix. I took a little extra time to make sure I had my wits about me before I tackled the 112-mile bike ride that once broke me.

In all of the difficult physical moments of the entire day, the most difficult mentally was probably, oddly, the first few miles of the bike. The entire day, that is the only time I can really say I wanted to not be doing this. I knew what was ahead and the course was narrow and crowded at first, which, next to wind, is my most disliked difficulty. The voices said, “you’re already tired; how are you going to make it through the next 14+ hours?”

Once I got past the first 16 miles and to the start of the two hilly “loops” of the course at Verona, I was in my comfort zone. I have ridden that loop countless times. I know it. I have literally ridden it in my dreams. I suddenly felt amazing. I was riding strong, faster than usual, and confidently. And then I got just past Mt. Horeb and turned east. The wind was ENE that day.  The bit of wind from the swim had become more than a bit. Headwinds and crosswinds and headwinds up hills were the special of the day. Did I mention that wind is my number one most disliked difficulty? Regardless, I still felt strong on the first loop. I now understand why I had to train through all those windy days on Iowa hills. I saw my family as well as my incredible, relentless, amazing friends, and Coach at mile 47 and was lifted. Linsey Corbin, the leading female pro also passed me on her second loop at this time–that was cool!

All those incredible people in my life were still on the same hill as before, at mile 90 on my second loop, giving me strength because now it was HARD. The last of the three major hills, lovingly referred to as “bitches”, was directly into a headwind. And every athlete got to do it twice. Even better, the 16-mile mostly straight, but not flat, ride back into Madison was directly into that lovely headwind. It took a toll, but I still finished very close to my expected time for the bike. I was surprised that I thought my abs were sore. I hadn’t ever gotten a really good core workout on the bike, that I noticed anyway.

I knew I would feel victorious when I completed the bike. I did. My family was waiting for me at the dismount line. I broke down into tears, and so did they (the girls, anyway). My beautiful daughters wanted to be at that spot, to see the victory where defeat had previously penetrated the air. In transition I cried some more and hugged dear friends who were volunteering, and possibly strangers. 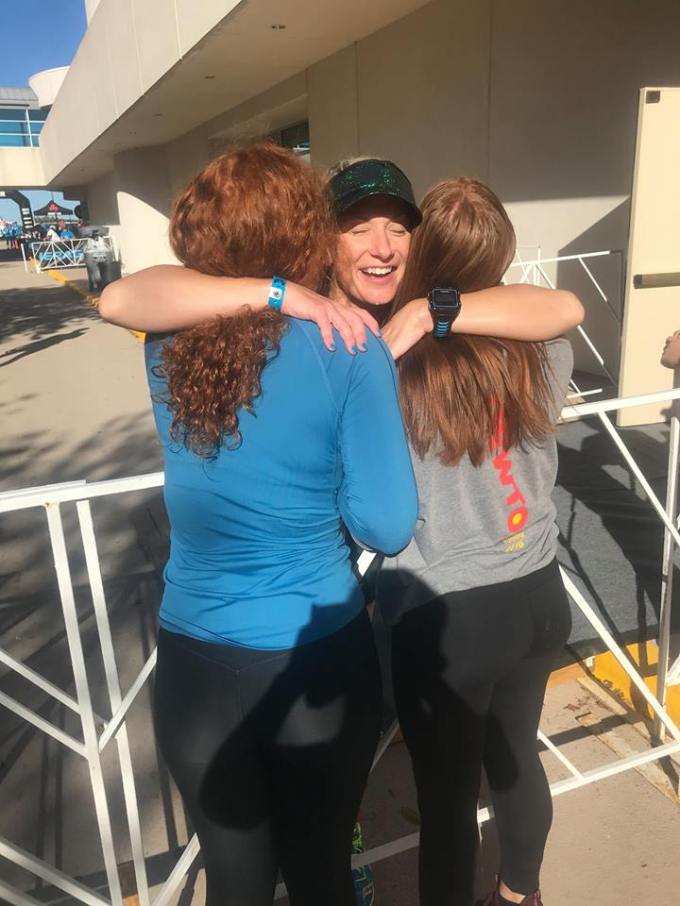 As I ran out, I felt cramping in my belly. I threw up a few times before I got off of the top of Monona Terrace. The “core workout” I thought I was getting was not so much that, but was my gut beginning a war. Colitis is a jerk and you just never know what it will do or when.

I saw my Coach, friends, family, team, all within the first two miles of the run and kept attack-hugging everyone. I had to be reminded to keep going multiple times in the first few miles. I was just enjoying it so much. The signs my people made–oh my goodness the hilarity! I love them all so much.

By mile 5 of the run, I thought I had worked through the gut issues, but I was sorely mistaken. I’m extremely thankful that Coach told me to hold strong the last half of the bike. I had time for the run. Time that I didn’t expect to need.

I found every single porta-potty on the run, I think. I didn’t say this would be a pretty story–I said the end would be happy.

At Run Special Needs I got some much needed medication, salty snacks, and a long-sleeved shirt, because it was getting so cold at my snail’s pace! Shortly thereafter, I ran past the Zoom Performance tent again, seeing my crew. One of my favorite people and most-respected endurance runner teammates looked me in the eyes and told me that this is exactly what I signed up for. His words echoed in my brain for the rest of the race.

In the back half of the second loop of the run, the course is a trail. It’s very pretty during the day. I’ve run it many times. I ran it on the first loop, in the daylight. It’s along Lake Mendota and the sounds are soothing, like the ocean. But after dark, the sights are anything but soothing. They aren’t even really “sights”. I’ve never run in such pitch black, ever. I knew about this. I heard about the need for a headlamp. I didn’t heed the warning.

My watch was dead. The last time Coach saw me I told him I was just doing math, getting it done. He asked if I knew the pace I needed to keep to finish. I did. And then my watch died. And it was dark. SO DARK.

I was trying to move forward at some kind of running pace on the dark, gravel trail. I exclaimed outloud, to no one around, “Holy shit, this is dark”.  Evidently there was actually someone around.

From out of seemingly nowhere, came an angel in the form of a young man named Jared, wearing a headlamp. He was about to pass me, and then he asked, “unless you want me to stay here for a little bit?” I agreed, and we ran together, with his light guiding the way. We didn’t talk much, but I learned this was his first IM and he learned a little about my story and redemption plans. After an aid station I ended up ahead of him, and it got dark again. The trail was turning and I couldn’t quite see where to go. It turned faster than I expected. I twisted my ankle off the trail and let out a little yelp. Again came a voice from behind. “You’re ok. You’re ok. Here, take my hand.” Jared pulled me back onto the trail and kept me going. We were stride for stride until mile 23 when I made one last porta-potty stop and we separated. I am so thankful for that kind human and I will never forget those miles.

With a dead watch, I asked a spectator the time. 10:26. I had three miles to go. I could literally saunter to the finish and come in before midnight. But wait. If I learned anything during the long day, it’s to take nothing for granted, and due to the rolling swim start I didn’t know exactly what time I started, so I might need to finish before midnight. Without the gut rebellion, I should have come in about an hour earlier on the run at this point. So, dead watch or not, just move as fast as possible.

Those last three miles, while taking nothing for granted, I couldn’t stop smiling. They were the most painful and slow yet most exhilarating miles of my life. In the late hours, there is camaraderie. There is reassurance that we will make it. There is acknowledgement that another is clearly in pain, but assurance to keep going. You pass, you fall behind. It’s irrelevant. We are all winning.  The chicken broth must have special properties.

Running toward the Wisconsin Capital Building, the constant beacon of the day, a chorus of frat boys cheered as I ran up State Street. Coach found me and told me where my family was at the finish line. Friends cheered me toward the end. Strangers told me I had done it, I was an Ironman. “Not quite yet”, I thought.

The people that surround me and have surrounded me throughout this journey are extraordinary. During training days, or through words of affirmation, or on race day–I have been overwhelmed trying to process it all. There is too much love to try to describe. I often feel unworthy and don’t understand the backing I have.

My hope is that in my story, others find their own “impossible”.