It’s not a unique concept, the idea of showing up. We do it for work, we do it for our kids, we do it when the sink is full of dirty dishes. Whether we feel like it or not, some things simply require us to be there, good day or bad.

When it comes to training, “just show up” has been my mantra more than any other this season (since Oct. 1). Tired? Who cares. Unmotivated? Completely irrelevant. Feeling a little sick? Pay attention, but give it a shot. Down in bed by doctor’s orders? Ok, take the time needed to heal. The point is, outside of extenuating circumstances, my goal has been to just show up for every workout, do everything in my power to win the day, and see how it goes. Sometimes the days I feel the worst end up being the best in terms of results.

When the morning of Ironman Wisconsin 70.3, my training race for Ironman Wisconsin, arrived last Sunday, it wasn’t the day anyone expected. Showing up became a bigger challenge than expected. Thunderstorms rolled in overnight, and at 4 am hadn’t stopped. By the time I was dressed, the announcement was out that transition was closing a little late, but the race was still scheduled to begin on time. Ok, show up for the next thing. Eat your breakfast.

Instead of hanging out in the pouring rain at the race site, the family and I chilled in the hotel for a little longer. My super smart and experienced husband suggested I go ahead and put my wetsuit on in the hotel because doing that in the rain is HARD. I pulled it up to the waist because I could finish the job in the car at dropoff. Get out of the car, walk to transition, and see what’s next.

“Setting up in transition” is a phrase I use loosely. It was pouring and the grass was already turning into mud. Inside my transition backpack were one plastic grocery bag full of run gear and another full of bike gear. There they remained, inside the bags. My backpack got covered with a poncho I had planned to wear, but didn’t need since I was in the nice warm wetsuit. Transition is closing. Go show up at the swim start.

The rain continued to come down and the race was delayed twice, totaling an hour. Thankfully I found athletes to talk to and then my family and friends ventured to find me. I set my mind for the day. For me, this was a training day for the full IMWI and I wasn’t willing to lose a weekend of training lightly. I told my people I would go as far as I could, but it would be a slow day if the rain and wind continued. My spirits were lifted, and I was ready to go. Show up to swim.

The swim was choppy and reminded me of swimming past the waves in the Gulf, but it felt good in spite of being slow. I pretended I was in the ocean and before I knew it I was turning for the shore. Slightly annoyed with my time but aware of the conditions, I ran for the next thing. Show up at transition and put on your bike gear.

Transition? Um, more like Tough Mudder course. By this point the rain had slowed and mostly stopped, but everything was completely wrecked. Every moment was a brand new decision that had to be made quickly. My plastic bag served as a place to momentarily rest each foot for balance as I wrestled on my gear. I was trying not to get my bike cleats caked with mud for fear of not being able to clip in. As you can see in the photo, I ultimately failed miserably at keeping my shoes mud-free. Mount your bike, show up on the course, and go as hard as you safely can. 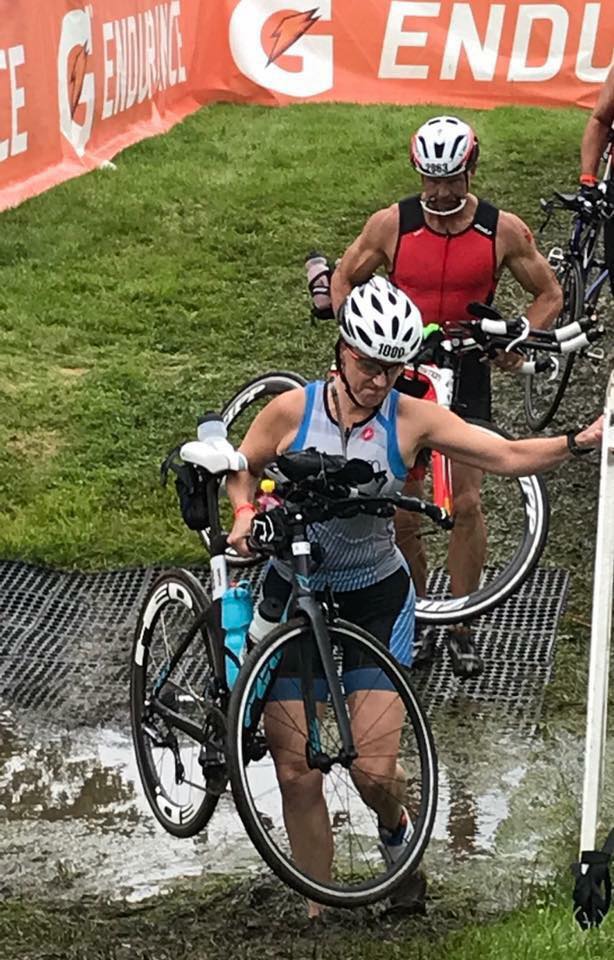 The first 35 miles of the bike course were chilly and windy at times, but do-able. I climbed well and did better than usual descending the steep hills. We did ride through some pretty large puddles in the first 5 miles, though! It was a matter of riding smart and safely. At that point, I got a flat. My rear race wheel flatted and I struggled with changing it. Trek support was very busy and didn’t get to me. Forty minutes later, I got it done. As I went to re-mount my bike, my chain still wasn’t quite right. I got lucky and a couple of “randoms” ran up to me. It was so unexpected to see a teammate and my husband right then out of the blue! They encouraged me and got me rolling. There was no panic, but I still didn’t know how the day would play out. Keep riding, show up for your supporters at the end of the bike and just try to make the cutoff. If you don’t, go run anyway. This is your training day. The rain did start again, but it wasn’t extreme.

T2 was no better than T1. Mud everywhere, I traversed it as delicately as possible in hopes of not burying my feet again. I didn’t know how much time I had lost with the flat, as I was not attentive to my watch, so there was really no way to know if I had time to finish. At the time I guessed 30 minutes, but discovered later it was closer to 40. It doesn’t matter. It’s time to run, so run your heart out and enjoy the fact that this day is absolutely EPIC.

Anyone who knows me knows I’m not the fastest kid on the block, in any of the disciplines. The run is not a place where I’m going to make up a ton of time, but I’m determined. I went out a little harder than I thought I could and held it as long as possible, which was more or less half of the course. The last half of the run my body just stopped moving forward at that pace. I slowed but I didn’t stop. Once I got out of the hills and back beside the lake, the wind was nuts, so there wasn’t much relief. Only walk aid stations, don’t give in, keep fighting. You don’t know how much time you have left.

In the last mile, my husband and daughters found me and gave me the push to finish with everything I had left. I later found out I finished with 9 minutes to spare.

Keep showing up in every minute. You never know. You just never know. 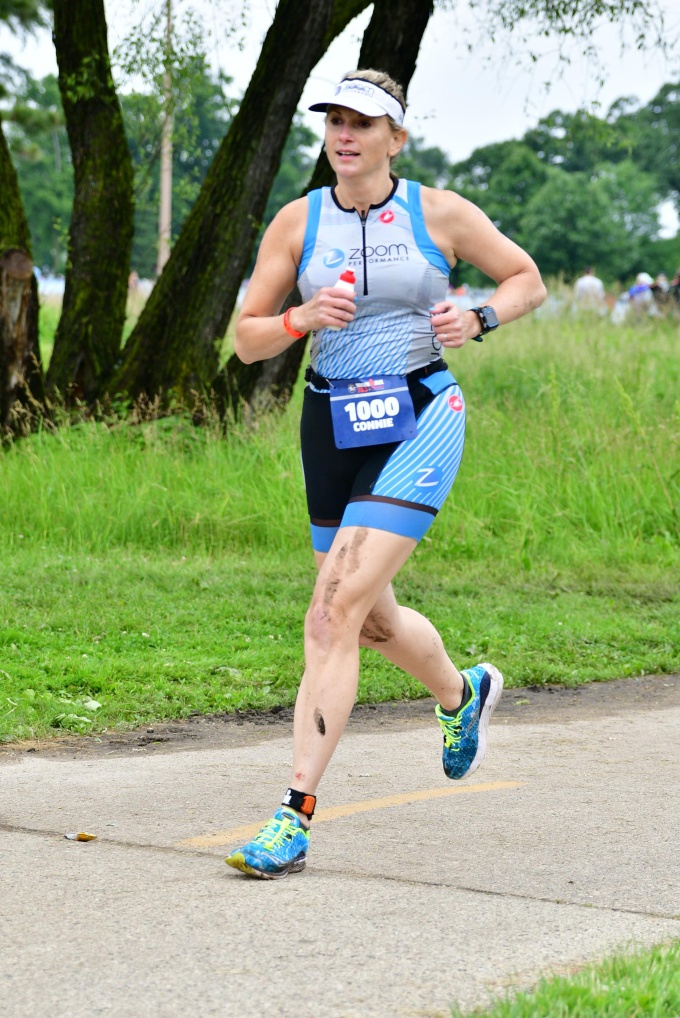 6 thoughts on “The Power of Showing Up: Ironman Wisconsin 70.3 Race Report”